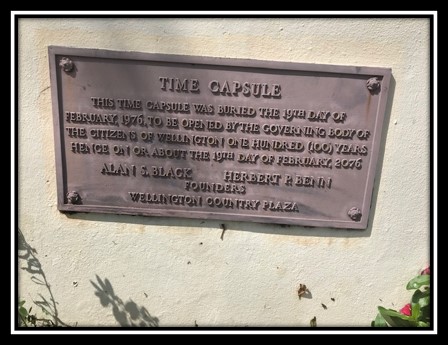 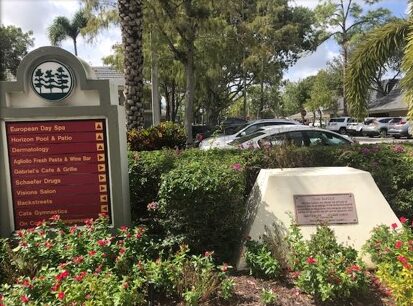 In 1976, the residents and builders of the Wellington Country Plaza shopping center put together a time capsule.  They buried it at the plaza and put up a stone plaque with the information.  It is to be opened in 2076…100 years from when it was buried!

Playboy magazine. A string bikini. A bank passbook in the name of “The Citizens of Wellington.”

A widely forgotten time capsule that provides a snapshot of Wellington life in the 1970s is getting new attention thanks to a few village employees and the Wellington Historical Society.

The time capsule was buried Feb. 19, 1976, during the construction of the Country Plaza in Wellington at the north intersection of Wellington Trace and Forest Hill Boulevard.

The plaque sits at the plaza’s main entrance off Forest Hill Boulevard. It lists the date the capsule was buried, instructions to open it “on or about the 19th day of February, 2076” and the names of the men who buried it, Alan S. Black and Herbert P. Benn, the “founders” of Country Plaza.

Jennifer Fritz, administrative assistant to Wellington Planning, Zoning and Building Director Bob Basehart, recently came across a document with more details about the time capsule while she was researching another project. Fritz made a copy of the document for Basehart, who sent it to Wellington Historical Society President and Village Attorney Laurie Cohen. She notified The Palm Beach Post.

In the four decades since it was buried, the time capsule has gone largely unnoticed — except by tenants in the plaza, said Mary O’Neill, property manager for the plaza’s owner, Bainbridge Construction.

“When I started, I saw it,” O’Neill said of the time capsule. She has planted flowers around the concrete marker, which is about 2 feet tall and 3 feet wide. Over decades of construction at the plaza, the time capsule has never been moved, she said.

But O’Neill did not know what was inside the time capsule — something illuminated by the document found by Fritz.

The items were chosen by Black, a developer whose work includes building many of the homes in Royal Ascot Estates in The Acreage, along with several early models in Wellington.

“Entombed inside the capsule … are the following mementos and items,” the document reads, before listing in this order:

When the time capsule was buried, the fledgling plaza was in its early stages. The first phase included a grocery and hardware store, a real-estate office, an appliance center, and surveyors’ and architects’ offices, according to a Nov. 7, 1976, article in The Palm Beach Post. That same article said construction on the second phase, which included a Winn-Dixie grocery store, was to begin the following February or March.

The time capsule’s original setting is described as being nestled “harmoniously under tall, majestic old trees.” The marker now sits next to a plaza directory, with a few small plants in front of it, shrubs to its rear and two small palms on either side.