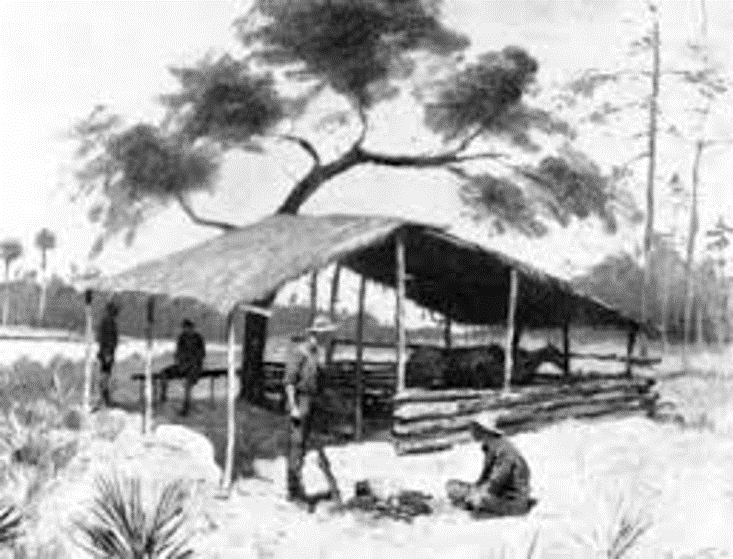 In the early 1800’s, pioneers from Georgia traveled long distances to travel to the area where the Village of Wellington now resides. They had to travel through deep, murky swampland. In some drier areas, they cleared one-lane dirt roads on which to travel.

Problems occurred if someone else was coming from the other direction on the narrow pathways,  so they cracked whips to make their oxen move faster and to warn others that they were coming through. These people were called “Florida Crackers” because of the cracking sound of the whips.

You might think you know the history of the American cowboy, the tales of the Wild West, but a little-known part of history comes from the earliest of all cowboys and cattle ranches of Florida. The stories of the Cracker Cowboys, made famous through the artwork of Frederic Remington and his 1895 article for Harper’s New Monthly Magazine, involve cattle rustling, ranch wars, battles with Native Americans, and the larger-than-life antics of scoundrels and heroes in the scrublands, jungles, and swamps of Florida.

Frederic Remington and the Cracker Cowboys

Near the end of the 19th century, the famous painter and writer, Frederic Remington, turned his attention to the Cracker Cowboys of Florida, aptly named for their expert use of whips and the sound of the whip crack as it broke the sound barrier. Remington wrote of the Florida cattlemen in harsh terms, calling their ponies emaciated, disparaging the swarm of mosquitoes, and calling the Crackers bedraggled. While some of these descriptions may be true, Remington also highlighted their colorful lives.

The sound of the Cracker’s whip, made from 10 to 12 feet of braided leather, helped the cowboys keep cattle on the trail when driving and brought them out of the jungles when rounding up the herd. Their ponies were small and lean as well, nicely adapting to damp and rough terrain.

At the time of Remington’s article, the Florida cattle were often described as lean, small, and even pathetic-looking creatures, yet no heartier species could be found. They lived off the land and survived in even the harshest conditions. In a state without a single fence, all ranching used the open-range system. The herds were only delineated by the use of branding, a scarification technique in which a hot iron burned a proprietary symbol on the animal. Unbranded cattle were free for the taking of any rancher able to catch them, but more unscrupulous characters would also rustle, which is a form of livestock theft, branded cattle and alter their markings.

Rise of the Florida Cattle Ranches

The Spanish first brought cattle to Florida with their attempts to colonize the peninsula in 1521 when Ponce de Leon returned to his recently discovered territory with horses and seven Andalusian cattle. However, the storms, insects, snakes, and Seminoles made ranching extremely difficult. Still, in 1565, with the founding of the first permanent settlement in Florida, St. Augustine, Pedro de Menendez de Aviles brought enough cattle to establish full-scale ranching, leading to 12 fully established ranches by 1700 CE.

Seminoles, enraged by the loss of their crops to cattle grazing and trampling, attacked colonists, driving their cattle into the jungles and burning towns. When the Spanish abandoned Florida in the early 1700s, they left the cattle behind. These creatures flourished in the wild and soon were sought after by English settlers and Seminoles looking to round up their own herds. By the Civil War, Florida cattle became the main source of beef for the Confederate states and their army, feeding troops and citizens deprived by the Union blockades.

One of the richest cattleman in the state of Florida during the 1800s, Jacob Summerlin, served in the Seminole War before working as a blockade runner in the Civil War. His prosperity drew Frederic Remington to Florida to study the Cracker lifestyle and the cowboy heritage that traveled west with the descendants of the Crackers to found the Western Cowboys of legend.

It was in DeSoto County, Florida that Remington met and painted the portrait of Bone Mizell, one of the most colorful characters in Florida Cracker history. Born in 1863, Bone’s father named him for Morgan Bonaparte Mizell in honor of the French Emperor, Napoleon Bonaparte. A lifelong cattleman, Bone earned fame for his ability to identify hundreds of cattle brands, his marksmanship for a rifle or six-gun, and his skill with bullwhips, rope, and branding irons.