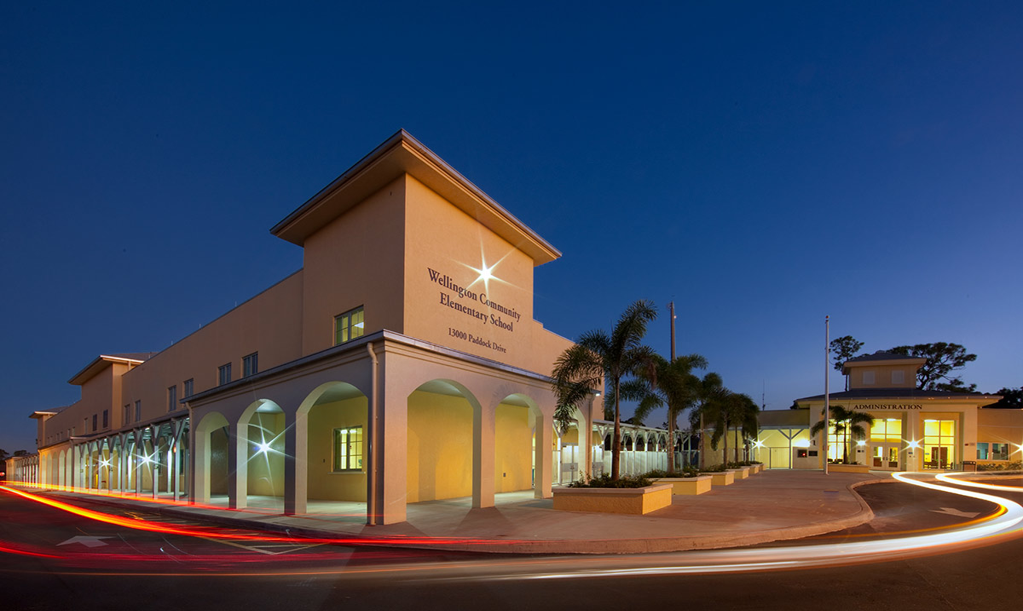 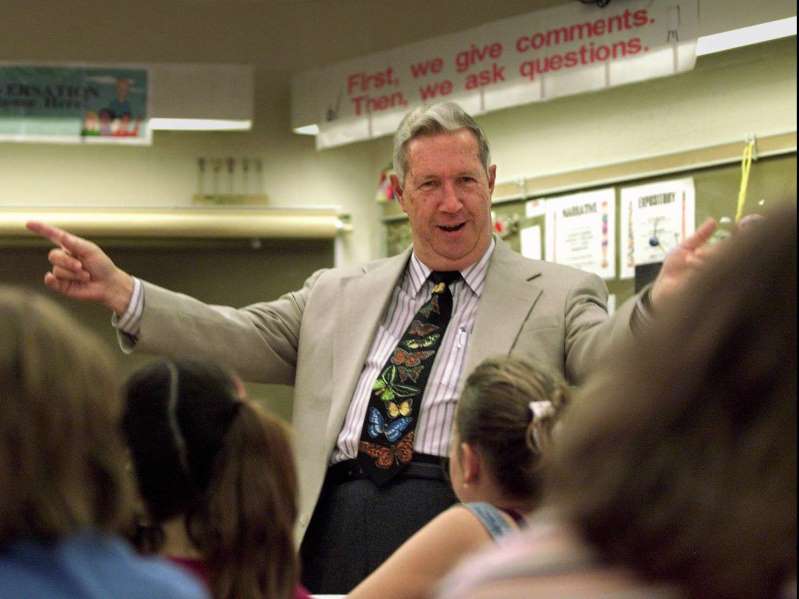 Wellington Elementary School opened its doors in 1980. The elementary school was built, and paved the way for the “A” schools in the Palm Beach County School District.

In certain circles, Wellington Elementary is known as the school that Buz built. When district leaders talk about tips of the education trade, more than one strikes upon a “Buz-ism.” And when the Guinness Book of World Records refers to the largest mass migration of 10-year-olds, Palm Beach County can thank Buz for seeing that the annual Safety Patrol field trip became one for the record books.

Buz Spooner was the kind of child who found the name Francis Earl unacceptable and gave himself another, borrowed from a kitten in a children’s book. He saw to it Buz stuck.

He was the kind of educator who built such a sense of community, that once hired, few left his ranks.

He was the kind of speaker who took to the podium so often with the words “Unaccustomed as I am to public speaking” his audience mouthed the words along with him without a hint of hostility, but perhaps a bit of a knowing eye roll.

Tens of thousands more may never know how much his hand influenced their lives, yet the evidence fills scrapbooks and photo albums belonging to the legion of former safety patrols who made the winter trek to the nation’s capital under Spooner’s watch.

Spooner was born in Maine, the oldest of four children. He went on to marry his high school sweetheart, Verlie Elaine Parks. Just out of college, the couple headed to South Florida for his first teaching job at Greenacres Elementary.

Are snakes under the steps?

After more than a decade in the classroom, he went into administration and was at the helm of Greenacres Elementary when he was tapped in 1981 to open a school in the swelling suburbs west of U.S. 441. Wellington Elementary was the county’s first all-portable school with 13 temporary classrooms and a make-shift cafeteria on 20 acres of sand.

“We’d watch the armadillos ambling across the campus; look under the steps for snakes, ’cause they were there,” Spooner recalled at his retirement from that position 19 years later.

Rare are the opportunities to oversee the birth of a new school and, by all accounts, Spooner scouted his staff with such intention that the bonds formed there were tough to break.

“True story,” Spooner once said. “I hired this young kid a couple years back to the teaching staff. A couple weeks into the school year, he comes to me and asks, `How come you don’t have any young teachers?’ ”

Spooner’s response: “They were young when I hired them.”

When teacher Linda Nadrowski was faced with the prospect of a district-directed transfer to another school or the opportunity to run the school’s library, Nadrowski opted to stick with Spooner even though the decision required her to change fields and return to college for her master’s degree.

“It was family. It was very hard to leave,” said Nadrowski, now retired and living in North Florida.

“The first day I’m working for him, I have a flat tire. He jacked up my car and put on the spare for me to go home,” Cittadino said. Cittadino suspected Spooner was second-guessing his hire who arrived late that day, but instead the two became a steadfast team — and dueling card players.

At some point each day, Spooner would call a time-out from their jobs long enough for a hand of Casino, a game Cittadino taught him. A competitive man, Spooner was forever chasing a win against his ace secretary, she recalls. (Spooner dominated other arenas instead, collecting piles of trophies for his prowess in ping pong and in shooting pool.)

Spooner was just as game to engage his students.

He required that the first field trip his kindergartners take was to the principal’s office. He dressed up at Halloween and passed out candy as students toured through the administrative offices in their costumes.

While his influence out west cannot be underestimated — Wellington Elementary was over-capacity the day it opened and for a time packed hundreds more students than typical peaking at roughly 1,300 students — Spooner’s reach extended throughout the county as long-time chief organizer of the annual Safety Patrol train trip to Wasington, D.C.

The trip itself predates Spooner by about a decade.

The excursion was originally sponsored in 1948 by AAA as a reward for a few dozen sixth-graders for their school service. (Only later, when middle schools emerged, did safety patrol become a fifth-grade job.) By 1958, Spooner was among the chaperones. He took over in 1980.

It was a project that required endless organization, hosting information nights at dozens of schools, coordinating the Amtrak service for not one, but typically four consecutive five-day excursions. Hotels. Dining daily for hundreds. Itineraries. Medical staff. Chaperones.

“Most people had no idea how hard it was to put those trips together,” said school board member Chuck Shaw, who as a principal was also active in the patrol’s countywide association and worked as Spooner’s heir apparent in the trip’s planning.

The Guinness Record began as something casual, a what-if among friends in the trenches of a gargantuan task. Documenting the number of students became a task unto itself, Shaw recalled. But by the spring of 1999, the record for the world’s largest and longest field trip was pending, having logged more than 4,000 students and almost 400 teacher-chaperones.

All but the oldest of Spooner’s own boys went on the trip, though they likely didn’t run into him in the mad dash through D.C. that in the three non-travel days attempts to stop at the Lincoln, Jefferson and Roosevelt memorials, the Capital building, the White House and National Archives, Ford’s Theater, the National Geographic building and the Holocaust Museum. Also the National Cathedral, the Smithsonian museums — and perhaps Spooner’s favorite and most difficult to arrange, Arlington National Cemetery, where students competed in an essay contest for the privilege of laying a wreath at the Tomb of the Unknown Soldier. (One misstep, traffic hiccup or weather delay and the wreath the Safety Patrol ordered would be deposited without the safety patroller to do it. This was field-trip high stakes and Spooner took it seriously, Shaw said. )

By Shaw’s estimation, Spooner loved the ramp-up almost as much as the students’ wide-eyed arrival in D.C. Spooner kept a folder complete with his parent pitch explaining what the trip entailed and his advice. He carried the folder on a whirlwind tour of night meetings preparing parents to release their babies to his care. For many it was their first trip without mom or dad.

The speech each year was the same, down to the jokes Spooner wrote in the margins, Shaw said. Spooner would tell parents what to pack including clothes to layer for warmth and comfortable shoes.

“If you really want to punish your child for whatever they’ve been doing wrong, go out and buy a brand new pair of shoes for the trip,” Spooner would riff to great effect.

“He used the same set of jokes, 15, 20 years,” said Shaw, who estimated that with multiple trips each year, Spooner likely logged more than 100 D.C. tours.

One time principal of the year, president of Wellington’s Rotary Club, and the former head of the principal’s association, Spooner gravitated to public speaking.

“He was hysterical. He would emcee a lot of events, Rotary, Kiwanis, always a master of ceremony. He’d be a comedian. He loved to be a public speaker. When he retired, he left a binder of speeches — I took that,” said Maureen Werner who rose to principal at Wellington in Spooner’s wake.