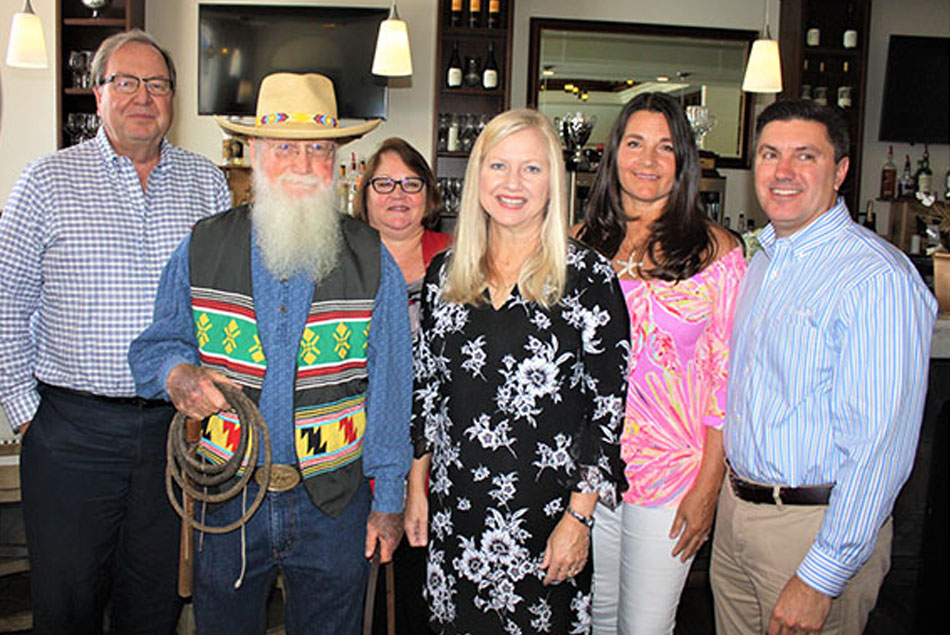 It was a packed house at the Wellington Historic Society lunch and learn event on Thursday, May 30 at the Wellington National Golf Club when retired Judge Nelson Bailey took the audience back into the rich history of the State of Florida.

A master storyteller, Bailey is a retired county court judge who lives in Loxahatchee Groves with his wife Carol and their dog Maggie. He has ridden across the land of Florida on horseback, exploring the rich history of the state on his horse Domino. Immersed in the past, his tales tell the story of Spanish roots, diversity and independence, where some truths over time have become forgotten.

“We got Domino when he was two and a half years old,” Bailey recalled with a smooth drawl and a hint of a southern inflection. “He lived with us at our place in Loxahatchee Groves. He passed away a couple of years ago at the age of 24. He did a cross statewide coast-to-coast ride for 18 years in a row. I put a lot of miles on that horse.”

Most people don’t know the story of Florida, he noted.

Early maps were hard to come by and not very accurate.

“In the 1600s, maps of the coastlines were made by connecting the dots of the shorelines and bays. Back then, the Spanish would sail along what is now known as Palm Beach County. At the end of the day, they would connect the dots, and they looked at it, and they chuckled, said it looks like a rat mouth. So, they named the place rat mouth. How many of you know how to say that in Spanish?” Bailey asked.

How true is the tale? Well other records are not particularly specific. According to the Boca Raton Historical Society, the name was derived from “antiquated maritime nomenclature warning of rock formations in shallow waters which could damage the ships.”

“Also, during the later period of Spanish rule over Florida, the King and Queen of Spain ruled that there could be no slavery in Spanish Florida,” Bailey continued. “Any slave coming into Florida could become a free citizen on two conditions: they had to become Catholic and every male in the family at a certain age had to go into the Spanish military in Florida.”

In 1845, Florida became part of the United States and the state’s Spanish roots faded into the background. Yet the area remains fascinating to Bailey.

“In 1989, I went on a cross-state horse ride with a hundred folks,” Bailey recalled. “This was before cell phones and all that stuff. You could ride in the woods and not have someone next to you blathering on the phone. We rode 25 miles for six days. We would ride out in the morning and ride a half day. We had a mobile kitchen. At noon time, we would eat lunch. We would go clear across the state. It would give you a completely different perspective on the State of Florida.”

He met many fascinating people but recalled one in particular.

“On that first ride, I met a guy who was 72 years old. Boy, I thought that was old. I am now 76,” he said as the audience laughed. “He was a fourth-generation cowboy. His family had started in the cattle business in 1822. He was still in the cattle business. He had a very large cattle operation.”

Bailey learned many stories about old-time Florida from him.

“I stuck to him like glue as we road across the state, listening to his stories. He was 72 that year. I rode across the state for a week each year for 10 years until his 82nd birthday. His name was Judge Platt. The Platt family has been here forever. He wasn’t a judge, but when he was a baby, somebody made the comment ‘that baby is as solemn as a judge.’ The name stuck.”

Village Attorney Laurie Cohen is the president of the Wellington Historical Society and invites the entire community to get involved. The idea for the organization began during a trip to New York, she explained after the luncheon.

“My husband grew up in Long Beach, N.Y. They had this wonderful historical society there,” Cohen recalled. “It had its own building, tours, produced videos and photographs. We thought that it was such a wonderful facility, and it would be great if we had such a place in Wellington.”

While Wellington is a fairly young community, it has a rich history, she said.

“Even though Wellington does not have the history of Long Beach, there was a history of Wellington before Wellington was incorporated. We wanted to preserve that history before the founders of the community are no longer available. So, this is how the idea got started,” Cohen said. “I mentioned it to then-Councilman Howard Coates, who is now a circuit court judge. He went out and formed a corporation. It sat there for a few years. Finally, it was Mayor [Anne] Gerwig who kind of pushed me to get it started and begin moving with it. It has been in full gear for about a year and a half.”

Cohen hopes to have a facility for the Wellington Historical Society in the future. The organization is currently working with the school district to incorporate some Wellington history into the fourth-grade social studies curriculum.

To find out more about the organization, or to become a member, visit www.wellingtonhistoricalsociety.org/membership.